Non-alcoholic fatty liver is the most common liver disease in the world, which affects about 25% of the world population and is becoming more frequent. A European study with participation from Lleida has found, in mice, a possible therapeutic target to treat this disease for which currently there are no drugs and has identified the protein mitofusin 2 (Mfn2) as one of the factors that protect against this disease. This disease involves a series of liver conditions with different degrees of severity, characterized by the accumulation of fat in the liver cells and that are not caused by high alcohol consumption. In addition, it represents a clinical spectrum that ranges from simple steatosis (isolated fat) and steatohepatitis (with inflammation) to cirrhosis and cancer.

The research was led by the Barcelona Research Institute (IRB Barcelona) with the participation of researchers from the Physiopathology group of the University of Lleida (UdL) and responsible for the Lipidomics Service of the Biomedical Research Institute of Lleida (IRBLleida), Reinald Pamplona and Mariona Jové.

One of the most serious forms of fatty liver is nonalcoholic steatohepatitis (NASH) where the accumulation of fat is accompanied by inflammation. In this study, published in the journal Cell, a decrease in the levels of the mitofusin 2 protein has been observed in patients affected by NASH, even in the early stages. 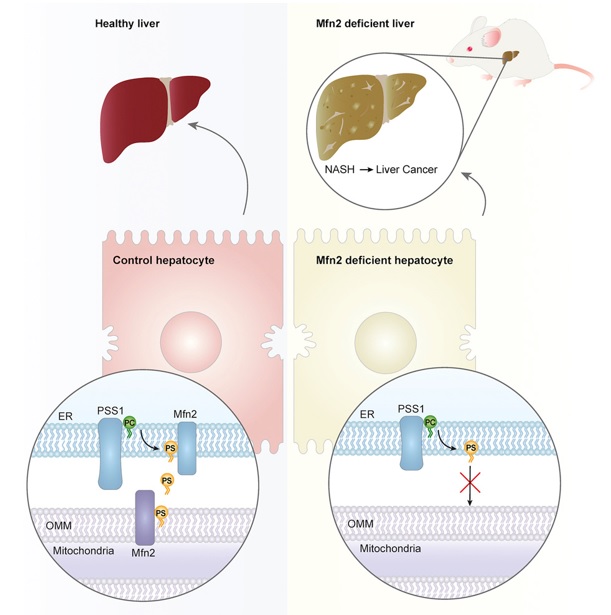 As happens in humans, the decrease in levels of mitofusin 2 in mice leads to the development of the disease. The team in charge of the study has achieved a remarkable improvement in mice affected by NASH by increasing the levels of this protein using adenoviruses, viruses modified to express proteins artificially, and to intervene in their expression.

At this time, they are studying the different pathways to increase the levels of mitofusin 2, without generating side effects, which could be relevant in the treatment of this disease.

The research has been funded by the Ministry of Science, Innovation and Universities, the Government of Catalonia, the Carlos III Health Institute, the CIBERDEM, the La Caixa Foundation and the Pere Virgili Health Research Institute.