The InforMa study ―propulsed by the University of Lleida (UdL), the Rovira i Virgili University (URB) and the Biomedical Research Institute of Lleida (IRBLleida)― promotes the participation of women in the decisions and strategies of population prog

In the Spanish State, women invited to participate in population programs for early detection or breast cancer screening, in general, are not informed of the possible adverse effects that may occur. The most important adverse effect of screening is the overdiagnosis or diagnosis of injuries that would never endanger women’s lifes. The InforMa study - led by researchers from the University of Lleida (UdL), the Rovira and Virgili University (URV) and the Biomedical Research Institute of Lleida (IRBLleida) - has shown that women do not have enough information about the benefits and adverse effects of early detection of breast cancer in order to make informed decisions. This research has recently been published in Plos One magazine.

It is estimated that 19 % of breast cancers diagnosed in women who undergo screening mammograms are overdiagnosed. Another adverse effect of screening are the false positive results that occur when there is a suspicious finding on screening mammography, which will require other diagnostic tests which will eventually discard breast cancer. Studies show that one in 5 women participating in the screening program will have at least one false positive result during their life. 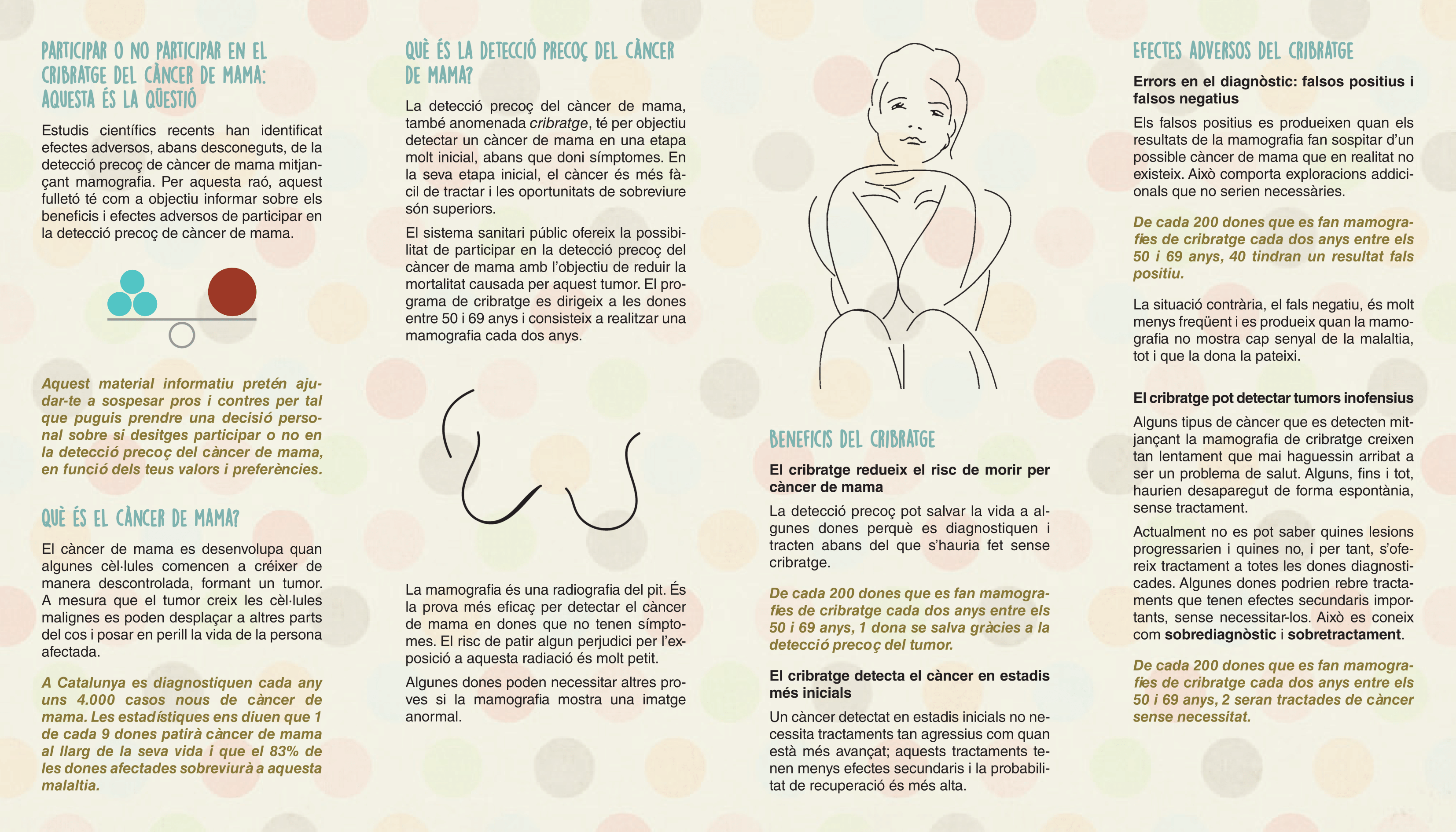 In the group that received the brochure with detailed information, 23 % of the women made an informed choice compared to the 0.5% of the women in the control group. Attitudes and intentions toward screening were similar in the two study groups with 82% of women intending to have early detection mammograms in the two groups. The decisional conflict was significantly lower in the group that received the information brochure and there was no difference between the two study groups in terms of confidence in the decision made, anxiety or participation in the screening program.

The research team, led by the Research Group on Statistical and Economic Health Analysis (GRAEES), has concluded that in the Spanish state women do not have knowledge about the benefits and adverse effects of breast cancer screening. "The fact of providing detailed information on the benefits and adverse effects has produced a considerable increase in knowledge and informed choice, with a high acceptance of informational materials" explained one of the researchers, Montserrat Rué.

Currently, this research group is carrying out a study on the acceptability and viability of personalized early detection of breast cancer within the National Health System. In this study, researchers from the IRBLleida, the UdL, the URV, the Arnau de Vilanova University Hospital, the Early Detection Program of the Lleida Health Region and the Catalan Health Institute collaborate.

The research has evaluated the response, given by 400 women in the Lleida Health Region, to an information brochure on the early detection programs of the Catalan Institute of Oncology and the Hospital del Mar, and the Canary Islands Health Service